Sydney was born February 25, 1830, in the parish of Woolwich, County of Kent, England. He was baptized March 11, 1830 by Rev. H. Fraser. At the time of baptism his father is listed as a Captain in the Royal Artillery and their abode is listed as Belmont Place. He married Rachel Amanda Cory on January 24, 1854 at Wellington, Prince Edward County, Ontario. Rachel Amanda Cory was born on February 6, 1834 to Dr. Benjamin Sayre Cory and his wife, the former Fanny Young. Benjamin Sayre Cory died 1885 in Hamilton. He was born in the U.S.A. Fanny Cory died in 1891 in Hamilton, Ontario. Rachel Amanda Cory was sister to Kate Cory who married George William Baker. 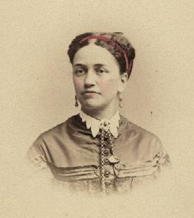 At the time of the 1911 census, Lydia Baker was widowed and living at 575a Spadina Ave in Toronto. Her son, Harold Baker was living with her, working as an electrical machinist in a factory, along with Lydia's mother Elizabeth Hazlewood, and her brother Alexander Hazlewood. Lydia's daughter, Fanny married William Howlett, and had two children; Mary, born 1909; and William G., born 1911. Harold L. was unmarried. 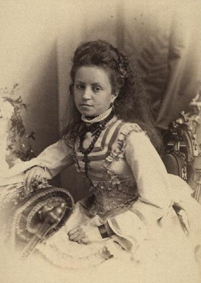 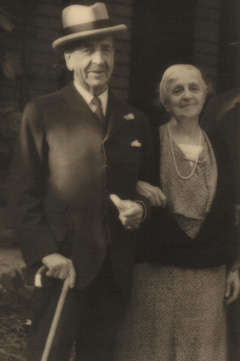 The children of Fanny Cole Baker and George F. R. Harris were: 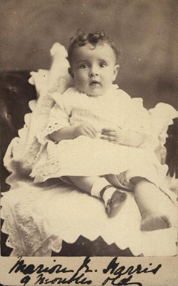 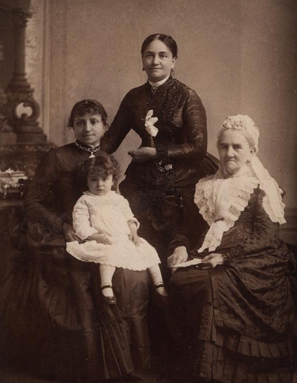 A story is reported in the Hamilton Evening Times Friday July 22, 1864, of the attempted murder of Thomas Chilton Mewburn. On the 5th of April last, a desperate effort to rob the banking establishment of Messrs. Hamilton & Davis, on James St., Hamilton, was made by a gang of burglars. Mr. Mewburn, the bookkeeper of the banking house, was awakened at his home on West Main Street, Hamilton, before four o'clock in the morning by the sensation like that caused by the application of chloroform to his nostrils, and discovered a dark figure escaping from his room. He sprang to a case of pistols at hand and attempted to fire at the burglar, but the cap burst without discharging the weapon. To protect his family, Mr. Mewburn stated that he had intended to kill the burglar. He then went to the gas light and turned it up, throwing light on the face of the burglar. As the burglar and Mr. Mewburn faced each other, the burglar raised his arm and aimed the pistol at Mr. Mewburn and fired. He then moved out and commented that he had not intended to kill Mr. Mewburn. The ball passed within two inches of Mr. Mewburn's head and penetrated the mirror. Mr. Mewburn then bolted the children's bedroom door and went downstairs to find that the hall window was open. Mr. Mewburn supposed that the burglar entered by the hall window, intending to find the keys to the safe, but the keys were kept sometimes by Mr. Hamilton, sometimes by Mr. Davis, and sometimes by Mr. Mewburn. Besides Mr. Mewburn, his wife, children, and two servant girls were also present that night.

Two weeks after the robbery and murder attempt on Mr. Mewburn in Hamilton, a similar crime was committed in Woodstock, and later a grocery store was also robbed. Mr. Mewburn's description of the person who entered his house led the police to arrest James McElroy and his gang. James McElroy was convicted of shooting Mr. Mewburn and also of burglarious entrance into Mr. Mewburn's home.

Rachel Amanda had one son by her second marriage, Sydney Chilton Mewburn, born December 4, 1863. Sydney Chilton Mewburn became a barrister and was a Major in the 13th Regiment, Hamilton. He married Mary Caroline Labatt of London, Ontario, who was born January 30, 1862. The wedding of October 10, 1888 was reported in Hamilton as follows:

On Wednesday afternoon Miss Mary Labatt, of London, a sister of John Labatt, well known as a successful brewer, was married to Sydney C. Mewburn, of the firm of Mackelcan & Mewburn, barristers, of this city. The following account of the event is taken from the London Advertiser of Wednesday evening: A large and fashionable concourse filled St. Paul's Cathedral this afternoon, when the marriage of S. C. Mewburn, of Hamilton, son of the inspector of customs, to Miss M. C. Labatt, daughter of the late John Labatt, of this city, was celebrated. As usual on such occasions the vast majority of those present were ladies. The ceremony was performed by Rev. Dean Innes, while John Labatt gave the bride away. The bridesmaids were Miss Mena Labatt, and Miss Katie Chapman, of Hamilton, while the groomsmen were George Thompson, of Hamilton, and H. Wyatt, of Toronto, Herbert Ambrose, of Toronto, Robert Hobson, of Hamilton, George Gillespie, of London, W. W. Osborne, of Hamilton, and R. H. Labatt, of Hamilton, officiated as ushers. The bride was arrayed in a magnificent white satin dress trimmed with lace, while the bridesmaids were similarly costumed, and each carried a beautiful bouquet of natural red roses. Among the guests present were Mr. and Mrs. T. C. Mewburn, parents of the groom; Mr. and Mrs. Harry Mackelcan, Mrs. Thompson, Mrs. Chapman and Miss Edith Chapman, Mr. and Mrs. Robt. M. Steele, Mr. and Mrs. Hugh C. Baker, Dr., Mrs. and Miss Gaviller, R. H. Labatt, Robt. Hobson, assistant secretary to the general superintendent of the Grand Trunk, Wm. Osborne and George Thompson, all of Hamilton; Mr. and Mr. George Labatt, of Prescott; Mr. Matheson, collector of customs, Sarnia; Mr. and Mrs. Harry Carling, Dean and Mrs. Innes, Miss McClimont, Rev. Mr. Hicks, Mr. and Mrs. Talbot Macbeth, Mr., Mrs. and Miss Mackenzie, Geo. Harris and Mrs. and Miss Harris, Mrs. Hunt, Mrs. Nelles and George Gillespie, all of London; Mrs. and Miss Ross, of Quebec; Herbert Ambrose and Harry Wyatt, of Toronto, and many others. The presents to the bride were magnificent, comprising a piano, many beautiful pieces of silverware and hundreds of other articles. Mr. and Mrs. Mewburn left for a trip east by the 4:30 train.

Another of Hamilton's old and honoured citizens has been called to his long home, Mr. T. C. Mewburn, Inspector of Ports in the Customs Department, having died rather suddenly at 4 o'clock Monday at his residence, No. 262 Main street west. Mr. Mewburn has been unwell for two months, but his indomitable perseverance kept him at his duties when he should have been at home under the doctor's care. La grippe laid a heavy hand upon him, and, off and on during the two months he was compelled to give up work for short times in spite of himself. On Friday he was not well, but on Saturday morning he arose and started for the station, intending to go to Dundas on customs business. He was so ill that he had to return home and spend the day there. He had a bad attack of dyspepsia on Saturday evening , but was better Sunday morning, and at supper time yesterday said he was very much better. During the night, however, the symptoms of dyspepsia returned, and from the complication heart failure resulted, and death came about 4 o'clock in the morning. Mr. Mewburn had reached the age of 70 years. He was a man of unusual activity and though sometimes eccentric in his ways was very much liked by the custom house employees from the highest to the lowest. He was born in Whitby, Yorkshire, England, on January 18th, 1822, and was son of Dr. Mewburn of that place. In 1833 he came with the family to this country and settled at Niagara Falls. In 1837, a lad of 15 years, he took part in the troubles of that time, as a volunteer. Subsequently he entered the post office at Queenston, and in 1845 was appointed to a clerkship in the custom house at Port Colborne. In 1852 he came to Hamilton, and was in various occupations, principally banking and real estate, for some years. In October, 1875, he was appointed clerk in the custom house here, and in July, 1877, was made Inspector of Ports, one of the highest offices in the department, an office which he has filled with credit ever since. He was twice married, his first wife being Miss Jane Gourlay, daughter of Mr. Robert Hamilton, of Queenstown. One daughter, Mrs. Young, of Trenton, survives. His second wife was the daughter of the late Mr. B. S. Corey, of Wellington, Ont., and Mr. Sidney C. Mewburn, barrister of this city, is their son. Mr. G. W. Baker of Buffalo, is a stepson, and Mrs. G. F. R. Harris, of Winnipeg, a stepdaughter. Mr. Mewburn had a very thorough knowledge of the collection of customs, and took great pleasure in searching up old documents and books in relation thereto. He had picked up in odd places some very valuable old works. The funeral will take place tomorrow.