Photograph used with permission from Musée McCord Museum. Click on the thumbnail above for a direct link to a midsized view of this photograph entitled "Rev. C. Forest, Montreal, QC, 1862" by William Notman (1826-1891), Accession number I-3991.1 Please visit the web site http://www.musee-mccord.qc.ca/en/ for a fascinating look at the work of William Notman.

Rev. Forest was the son of Charles Forest (born April 15, 1790 in Davenport, England and Frances Thomas, born April 3, 1790 in Westminster, England.) Rev. Forest received his education at the University of Bishop's College, Lennoxville, Quebec (B.A. 1846, M.A. 1856). In his early career he was a teacher and itinerant catechist at Chateauguay, Lower Canada or Canada East. He was ordained a deacon September 21, 1846 in the All Saints Chapel in Quebec and became a priest on November 1, 1847 at Holy Trinity Cathedral in Quebec. His career was as follows: During 1846-47 he was at Robinson & Bury, Canada East as a missionary; during 1847 he was at the Quarantine Station at Grosse Isle, Canada East as chaplain; during 1847-1859 he was the incumbent at St. Matthew's, Grenville, Canada East; during 1859-1863 he was the incumbent at Osgoode, Russell & Cumberland, Canada West; during 1863-1874 he was the incumbent at Merrickville & Burritt's Rapids, Ontario; and during 1874-1881 he was the rector in Williamsburg, Ontario. He was the Rural Dean of Stormont, Dundas and Glengarry, Diocese of Ontario, from 1879 to 1881 and Canon of St. George's Cathedral in Kingston, Ontario in 1881. His publications included the following: "Law of Christian Liberty" published in 1867; "The Sacrament of Regeneration" and "The Doctrine of Holy Baptism" published in 1884; and "Is Lay Baptism Valid". He was very interested in the education of Indians and was employed in this work by the provincial government at St. John's. The first church at Ormstown was erected through his efforts. Remarks included in the obituary of this servant of God included the following: "The deceased gentleman has been in ill health for some time past, so that his death was not unexpected. Canon Forest was Chairman of the Mission Board last year, and took a warm interest in its operations. He was one of the most polished and eloquent speakers in the Synod, and commanded the respect of all who knew him". (Evangelical Churchman, January 5, 1882) 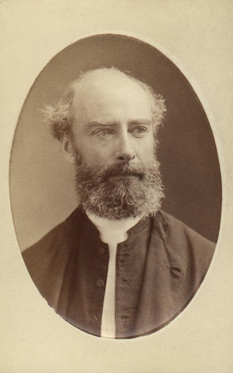 On the 1881 Census of Canada, Charles Forest, occupation minister, 58 years old, origin English, is living with Fanny, age 59, origin Irish, and Catharine Baker, age 27, English, and Marion Forest, age 25, English. They all belong to the Church of England. Catharine Baker shows her birthplace in 1854 as Ontario while Marion Forest shows her birthplace in 1850 as Quebec. Catherine Baker and Marion Forest were first cousins as Catherine Eliza was the fifth child of Hugh Baker and Emma Wyatt. Hugh Baker was Fanny Forest's older brother. Catherine never married.

In a book entitled The Diary of Sophia Macnab, written at Dundurn Castle, (across the street from Hamilton Cemetery and overlooking Hamilton Harbour), Sophia, age 13, mentions Fanny Baker: "Tuesday, July 7, 1846--Miss Fanny Baker spent the day here she is a very nice girl. Her voice manner of speaking laugh sound altogether so like Liela Wakefields that if you did not see her but heard her talking you could hardly tell her from Liela Wakefield".